Welcome to my blogland friends 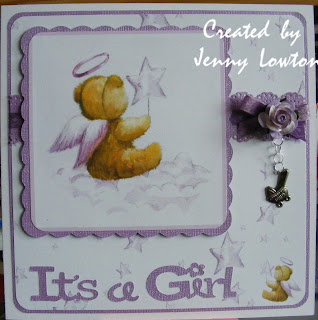 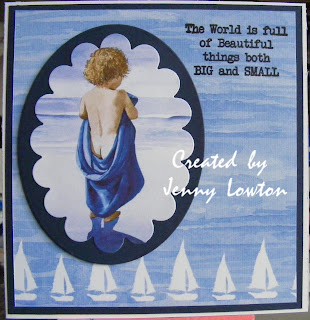 I treated myself to the new Faye Whittaker cd from Joanna Sheen and have been having a bit of a play. The images are sweet without being sickly and some of the backing papers are so pretty while others are perfect for beach scenes, etc.

The baby girl card is done in lilac because when I tried the pink cards I have they didn't look right but for me the lilac card goes really well.

The boy on the beach is a timeless image and I thought the words on the stamp suited the scene so well.

Thanks for stopping by and I do hope you like todays cards. See you soon. 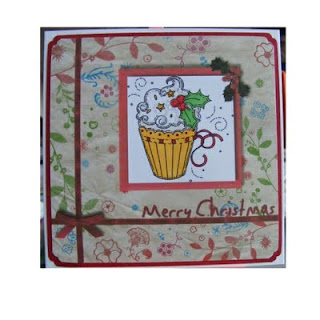 Over on Rainbow Lady's this week we want you to go with the theme Sweet Treats for Christmas, we were given some Whimsy digis to play with and this is what I came up with. The card is designed in Craft Artist and then the topper is coloured with the trusty Promarkers and I have added glitter to the icing.
I hope you can come on over and have a play as we do have another prize on offer from our lovely sponsors.
Posted by starcyl at 9/15/2011 3 comments: 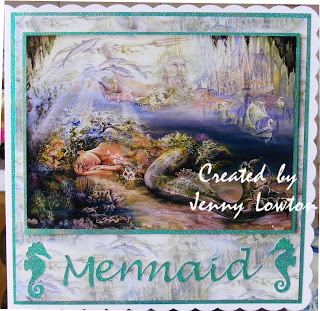 Hello all, can you believe it's another Sunday and half way through my two weeks leave. We have so much to do in the house that we have been at home busy, I really feel like I drew the short straw because I am doing the hall. At first I though it's only small I can get that done in no time but there is so much painting to do with all the doors which were brown and are now white and have taken so many coats that I think it would have been better to buy new ones. It is now nearly done and looking so much brighter that it will be worth it once it's finished, even if I will be fit for nothing.
Now onto this weeks challenge over on CD Sunday, we will occasionally use a letter of the alphabet as it is quite fun to see what people come up with, quite often things you wouldn't have thought of yourself, this weeks letter is M. At first I was a bit stumped and couldn't think of anything that I would have that would work, then my team mates started putting their creations on the admin blog and I was thinking why didn't I think of that, so thought I'd better get a move on and make something. It was Joanna Sheen to the rescue once again, I have used the Enchanted Dreams cd and my M is mermaid. I found this image while I was looking through the cd for inspiration and then cut out the word and the seahorses on the Cricut using SCAL. The backing paper is some that I've had for ages and never really used it as it is quite difficult to get anything to stick to it but now that I've found Pinflair it works a treat.

I do hope you'll come on over and join us, and check out who won last weeks great prize of three Artylicious cd's.
Posted by starcyl at 9/11/2011 2 comments: My favourite picture of Pooka

Proud to be on the team

Proud to Design for

I made the top three 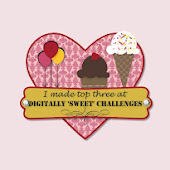 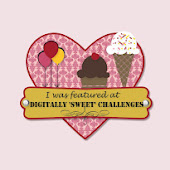 starcyl
Hi all Welcome to a window on my crafting world. sometimes the things I make make me smile, sometimes it's a grimace but whichever it is you can be sure I've had fun doing it. I do hope you enjoy looking at the things i do and that you'll come back to visit again soon. I am married to a fabulous man who is very understanding of the way I seem to spend money like it is going out of fashion, so no problems there. I live in Wigan and for those of you who don't know it is between Liverpool and Manchester, I have been here for the majority of my life but am originally from Liverpool. 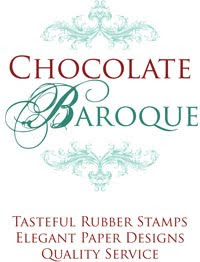 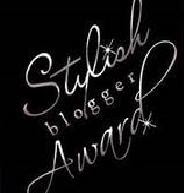 You make my day award